IMPORTANT: Due to Covid-19, we will be operating with reduced seating capacity. All patrons and filmmakers must wear a mask to enter and while interacting in the lobby areas. These rules will be strictly enforced.

“There are more film festivals in Buffalo now than any time in the area’s history, and that’s a great thing for lovers of cinema. The most purely fun of these movie extravaganzas? It’s undoubtedly the Buffalo Dreams Fantastic Film Festival, which offers action, animation, comedy, drama, fantasy, horror, thriller and science fiction features and shorts from around the world.” – The Buffalo News

“Whatever your tastes, this festival has something for you.” – The Public

“Buffalo Dreams is a well oiled machine of blatant awesomeness, due completely to the fierce dedication of its showrunners, Gregory Lamberson and Chris Scioli. These two work tirelessly to program one intense and well rounded festival, and perhaps what’s more impressive is the fact that they still remain completely approachable throughout. They do all the greeting, introductions, and personally hand out passes and talk to fans and festival goers.” – Bro Knows Movies 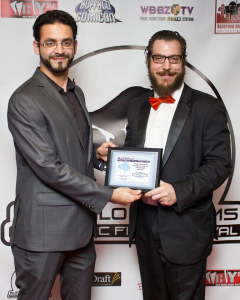 The upcoming eighth edition of Buffalo Dreams Fantastic Film Festival marks the 11th year festival co-directors Gregory Lamberson and Chris Scioli have programmed an international genre film festival in Western New York. The pair formed their partnership for Buffalo Screams Horror Film Festival, which they ran for three years before re-branding as Buffalo Dreams Fantastic Film Festival to include a wider mix of programming in addition to Horror: Science Fiction, Fantasy, Action (including crime dramas and westerns), Animation, Comedy, Thrillers and even documentaries. The goal of Buffalo Dreams, which has emerged as one of the pre-eminent film festival in the northeast, remains twofold: to bring the best independent genre films from around the world to Buffalo, and to shine a spotlight on the artists who create them, including local filmmakers.

Lamberson is the award-winning author of 15 books, and has directed eight feature films, among them the cult classic Slime City, Johnny Gruesome, and the upcoming Widow’s Point. Scioli works for Ominous Press, a global entertainment brand creating cutting edge content in publishing, gaming, and film. Over the years these friends have built a reputation as festival directors who care about the filmmakers whose work they screen, for fostering a spirit of camaraderie among attending filmmakers, and for drawing attention to the Buffalo-Niagara film community. They believe films should be presented on a single large screen so that festival goers never have to choose between films. 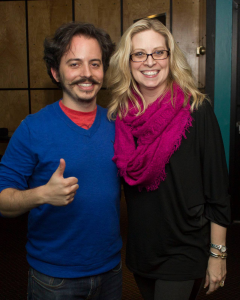 For their 10th year as festival directors, Lamberson and Scioli intend to take Buffalo Dreams to an even higher level. Since it inception, Buffalo Dreams has run every November, after the Halloween rush. In 2021, the festival will run for seven days during the fall, from Friday, November 5th – Thursday, November 11th.

The entire Buffalo Dreams team looks forward to considering your excellent work for inclusion in what promises to be our best season yet.

The festival’s programmers like bold, original and edgy films that are well made. There is even a “WTF” category for the most outrageous films selected – films that surprise with their originality and unpredictability as much as they entertain. The programmers will not show pornography. The festival does not accept “fan films” featuring copyrighted characters, and every film must contain only original or licensed music.